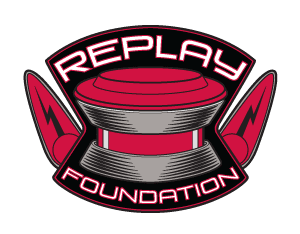 WHAT IS THE REPLAY FOUNDATION?

STATING OUR MISSION: The Replay Foundation is a registered 501(c)(3) nonprofit organization that promotes the preservation, restoration, and enjoyment of pinball technology, with an emphasis on the player experience. Under the brand name PAPA (Professional & Amateur Pinball Association), the Replay Foundation operates and supports pinball competitions worldwide.

FULFILLING OUR MISSION: Replay FX, otherwise known as the Replay Foundation Expo, is a living history of the arcade and surrounding video game culture, featuring more than 1000 full-sized arcade and pinball machines with some dating back nearly 80 years. We believe the best way to preserve something is to keep it alive, functioning, and happening! Rather than put our machines in a museum, we fix them up and put them on the arcade floor for attendees to enjoy just like old times.

Released under its popular pinball brand “PAPA“, the Replay Foundation has produced hundreds of instructional pinball videos as a way to help newcomers learn more about pinball and enjoy this classic part of gaming history. In many cases, the games shown are rare and/or difficult to locate, and so in addition to helping new players learn the rules of this classic and traditional form of gaming history, these videos were also filmed with the intent of preserving the sights, sounds, and physical movements of machines that may not, and in some cases definitely will not, be available for future generations to enjoy.

The Replay Foundation has also produced a series of instructional guides intended to help tournament directors and players improve and enjoy the game.

Since 2012, The Replay Foundation has designed and implemented a custom video broadcast system capable of producing high quality live coverage of the world’s greatest pinball competitions. In addition to broadcasting Pinburgh, the largest pinball tournament in history held at our very own Replay FX event, the Replay Foundation team and volunteers have travelled to multiple cities across the USA to broadcast dozens of tournaments for the benefit of the community. We have also helped countless leagues and tournaments set up their own broadcasts.

Between 2016 and 2019, the Replay Foundation commissioned and assisted in the creation of a 250+ page non-fiction account of pinball history dating from the early 1900’s until present day. We believe this account is the most in-depth and accurately researched book on pinball history ever written, and we look forward to its future publication. All oral histories recorded during the research of this book will be provided to a Pittsburgh university archives for preservation. The manuscript is fully written and currently in the final stages of editing, so stay tuned!

The Replay Foundation has rebuilt, maintained, and preserved hundreds of pinball machines and video games since its inception. When building our collection, we intentionally focused on acquiring and fixing broken games to bring them back to life, rather than purchasing working games and taking them out of circulation. Members of our team have also spoken with students from multiple local schools about everything from the pop-culture style of arcade artwork to electrical engineering. We periodically offer tech-classes and are proud to support local educational efforts like Academy Pittsburgh

The easiest way to inform the public about the long and storied history of pinball and arcade culture is to keep them playing the games! In addition to the locations shown below, The Replay Foundation has set up machines in support of Pittsburgh’s Natural History Museum, the Andy Warhol Museum, local leagues, and more! We continually seek opportunities to support our surrounding community. 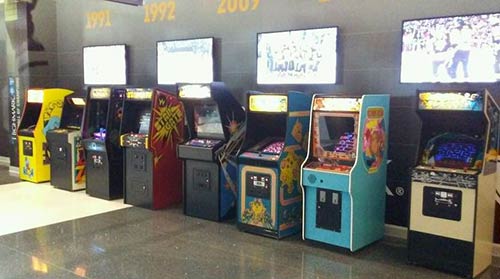 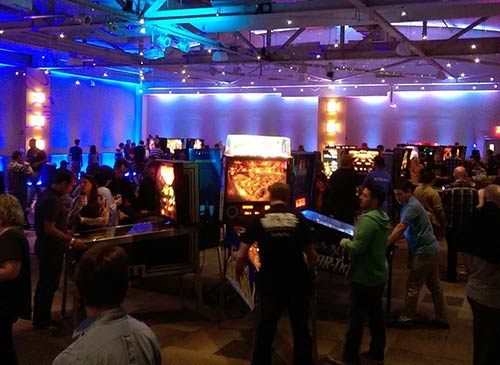 Starting in 2012, the Replay Foundation networked and developed a series of tournaments spanning the United States. After traveling thousands of miles to offer in-person assistance and supplying both games and software to various locations to help grow the sport of competitive pinball, the Replay Foundation has recently turned this project over to Stern Pinball, the world’s largest pinball manufacturer, in the form of the Stern Pro Circuit.

Between 2012 and 2018, the Replay Foundation offered critical support in running several popular tournaments at the Louisville Arcade Expo.

Since 2014, the Replay Foundation has coordinated with members of the Free State Pinball Association to promote and support pinball leagues around the world at leagues.papa.org

Between 2015-2018, The Replay Foundation and the American Classic Arcade Museum coordinated to produce the following educational seminars at Replay FX:

While the Replay Foundation specializes in pinball and video game-related projects and events, we often find ourselves in a position where we are able to step outside of the arcade and offer something extra to our surrounding community. Below are a few examples of ways we have chosen to help others.

Between 2008-18, the Replay Foundation has donated more than $62,000 to the charities listed below. These donations do not include a list of separate fundraisers we have supported by setting up pinball and arcade machines to help them generate additional interest for their causes.

The Replay Foundation has supplied web hosting services for IPDB.org since 2012, and each Replay FX event includes the Intergalactic Pinball Tournament, where all proceeds are donated to charity.

The Professional & Amateur Pinball Association was founded in the mid 1980’s by Roger Sharpe and Steve Epstein at Steve’s world-famous Broadway Arcade in New York City. Steve and Roger ran six world championship tournaments, with the last one being held in Las Vegas, before retiring and passing the reins to current president, Kevin Martin.

In Steve’s own words: The beginning of what was to become PAPA began in the late 1970’s when myself, Roger Sharpe, and a third player named Lionel Martinez, began tracking personal games played against one another. We logged over 10,000 sets of games over a four/five year period. From that data we developed the league scoring system used in the first PAPA league play around 1985/1986. This lead to the tournaments in the early 1990’s. I guess meeting Roger at the Arcade in 1975 and starting to play together on a daily basis not only led to a great and lasting friendship, but to the world of competitive pinball.

Way back in 1992, Steve Epstein, co-founder of PAPA, started publishing a nifty little magazine called “The Flipside”. Each issue was between 24 and 44 pages, all black and white, and the issues came out on a regular schedule of “whenever”. When Kevin Martin acquired PAPA from Steve and co-founder Roger Sharpe, that included various inventory such as T-shirts and back issues of The Flipside. Unfortunately, most of those items were destroyed in the flood of 2004, before they could be put to any good use. The good news is that we still have at least one copy of every issue of The Flipside. Better yet, we have scanned these in and published them here. You may browse these pages as high-quality JPEGs, or large PDFs. Download them, save them, enjoy them at your leisure.

To the best of our knowledge, The Replay Foundation has the rights to this content, which were assigned to PAPA, without reservation, by the authors when they submitted articles for publication. PAPA hereby re-releases this content under the Creative Commons Attribution-Noncommercial-No Derivative Works 3.0 Unported License.

If you are an original author of any content published in The Flipside and do not agree with the above interpretation of The Replay Foundation’s rights to the content, please contact us immediately. 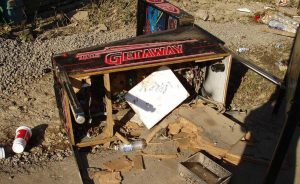 After a six year hiatus, Kevin Martin took over the PAPA organization in 2004 and began construction of a World Headquarters facility located near Pittsburgh, Pennsylvania.

On the evening of Friday, September 17, 2004, just five days after the end of the PAPA 7 World Pinball Championships, an unusually severe flood put the PAPA facility under five feet of water. Prior to this, the facility had not flooded since the 1950's. In the 1960's, nearby Chartiers Creek was retrenched and new drainage systems were put in place. There had been no flooding since that time.

This flood was well beyond the "100 year flood line" and was essentially a freak occurrence. The remnants of Hurricane Ivan dumped a record setting 5.95 inches of rain on the Pittsburgh area in just a single day, on top of already saturated grounds from record rainfall throughout the year. The Carnegie area, where the PAPA World Headquarters were located at the time, was particularly hard hit

The floodwaters carried silt, debris, sewage, and diesel fuel. Every pinball machine was submerged at least up to the backglass, and every surface within five feet of the ground, including playfields and inside cabinets, was coated in the floodwater sludge. The sludge was a sanitary hazard and immediately destroyed materials such as electronics, press board, and playfield artwork.

Two hundred and thirty-two pinball machines were destroyed, as well as a handful of classic video games, an extremely rare Tattoo Assassins prototype, a sitdown Omega Race, some great dancing games, et cetera. We were able to salvage many plastics, some boards, coin mechs, backglasses, and most of the playfield glasses. This process did not take place until a professional cleanup and restoration company had been through the facility.

On December 6, 2004, plans were announced to rebuild and relaunch PAPA, and the PAPA 8 World Pinball Championships were held in August 2005, with 277 pinball machines available to play. A major factor in deciding to rebuild was the huge level of support found in feedback from everyone after the flood. Players, collectors, vendors, and other enthusiasts sent hundreds of e-mails, and we appreciated every single one.

View Photographs of the Flood

In December 2012, the entire collection of pinball machines and other arcade games housed at PAPA Headquarters were donated to the Replay Foundation, which will continue to operate the machines and related tournaments under the brand name PAPA. The Replay Foundation also manages Replay FX, a combined pinball and video-game festival far exceeding the scope of any previous PAPA or Replay Foundation effort. We are proud to report the current PAPA brand name and Replay Foundation nonprofit have never had more influence, maintained more games, or offered players more educational resources than at this moment.