"A helpful guide for starting your own local league or competition."

The goal of this guide is to help directors run successful pinball tournaments and leagues that will result in repeat attendance, positive word of mouth, and help the game of pinball prosper. Setting up games for competition requires far more thought than just making them play as difficult as possible, otherwise the PAPA World Championships would include games without flippers and force players to wear blindfolds.

When setting up your games, avoid arbitrary, sweeping decisions and focus on the specific needs of your event!

This guide is intended to be a community resource that grows and becomes more refined over time. To this end, PAPA welcomes feedback and suggestions. If you feel that you could contribute to this guide in a meaningful way, please contact us!

This section of the Director’s Guide was created and submitted by Kevin Stone.

Purpose of Seeding The concept of seeding is to provide an advantage to the best players, as well as to balance out tournaments to avoid the two best players from meeting head-to-head early in a tournament. Everyone prefers to see the best players duking it out at the end of a long tournament. People also love the cinderella story of the low seed making it to the finals by knocking off higher seeds. All professional sports use seeding in playoffs and finals. Great examples of this are the NCAA basketball tournament, where there are actually four number 1 seeds, and the NFL with top seeds going to division winners.

What is seeding Seeding is a format used to rate players. The top seed is 1, second seed is 2 and so on until the last player is assigned a seed. Thus if a tournament or playoffs has n number of players, the last seed will be seed n.

When to use seeding Seeding players is normally reserved for playoffs, including both tournament and league playoffs. However, there may be instances where qualifying rounds (such as Pinburgh) or leagues use seeding as well. This could just be limited to who gets to pick a game or what order players play, but it is still seeding that determines who does what.

How to determine seeding There are many ways to assign a seed to individual players. This will be affected by the tournament or league format. Common types:

Why use seeding Seeding allows a tournament director to balance out the playoffs to avoid top players eliminating each other early in the tournament. It also provides a benefit to players that perform well during qualification rounds. Without a benefit provided during qualifying, what is the purpose of qualifying other than to make the playoff field.

Seeding can also be used to determine who gets to pick a game or what order they play in.

The proper way to seed a tournament is to always ensure that the top seed is playing the lowest seed. But it doesn’t stop there. The next round must be taken into account to ensure that if all top seeds win their first match, that the top seed is still playing the lowest seed in round 2. If a lower seed beats a higher seed, then all bets are off, but the initial setup of the bracket will stay the same.

Fortunately, there are many public web-sites that you can download single and double elimination brackets that already have the seeding set up for you. However, some are also incorrect. The easiest way to verify the bracket is correct is to use the following formula to verify the seedings are correct.

N = Number of players in the bracket

X = Known Seed (or top seed in the match)

Y = Competitor Seed (or bottom seed in the match)

For example, seed 3 of an 8 player match plays seed 6:

Can you figure out what seed 27 would play in a 128 player match? (see answer at end of this section)

Static vs Dynamic seeding Static seeding is used in brackets that are defined before playoffs begin, and do not change once they begin. An example is single or double elimination brackets. The seeding is set up initially and winners advance in the bracket. If lower seeded players win against higher seeded players, the potential exists that two lower level seeds could play each other in the semi-finals, where the other two players could be two higher seeds playing each other. This is static because the players follow the bracket. Seeding is effectively moot after the initial seeding in a static scenario.

Dynamic seeding is used in playoffs or qualifying when subsequent rounds are not predetermined at the start. For instance, if qualifying is using groups of 4 players each, and based on the results the groups are re-organized, the seeding of each player changes, either for the entire tournament or within each individual group. For instance at Pinburgh, after each round every player is reseeded. The next round’s groups are predetermined based on seed, but the players change because their seeding changes after each round is played. A better example is Pinburgh playoffs. The playoffs are not a standard single elimination bracket, but rather a dynamic bracket. Players keep their initial playoff seed the entire playoffs. What differs is that the top seed will always be playing the lowest seed, and thus the groups are dynamically determined based on player’s seeds, rather than following the flow of a pre-determined bracket. 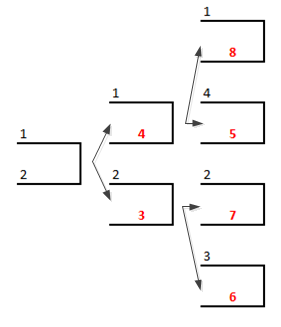 The trick is starting with 2 players, then expanding by a factor of 2 each step of the way. So you would start with 2, then 4, then 8, then 16, then 32, and so on. Sounds hard but it’s really not. Start with 2, so you have seed 1 playing seed 2. The next step, you just take each seed and create a new 2 player match from that one seed. So now you have seed 1 playing ?, and seed 2 playing ?.

Repeat this again and again and the bracket will be created. So the next iteration would create 4 new matches with seed 1 playing ?, seed 2 playing ?, and so on. After using the formula we now have seed 1 playing seed 8, seed 2 playing seed 7, etc. It is important to expand the bracket equally so seed 1 and 2 will never play each other until the finals. See the diagram for a simple example. Now that is a good bracket.

Another way to think of it is this: The total of the seeds in an initial match always equals the number of players in the bracket + 1

All finalists will be divided into groups of four players based on standard seeding procedures. Each group will play three separate four-player games, each on a different machine from among those designated for that division. Each four-player game will be scored as follows:

Note that the original seeding of players when entering the final rounds from qualifying is used in every round. At no time does a player’s seeding change from round to round; therefore the advantage of qualifying in first place can be significant.

No group may select a machine which has already been selected by a group in the same round, nor may they choose a machine on which they have already played in that round (unless machine malfunctions have made this unavoidable; tournament officials may choose to provide additional or substitute machines, however). If the machine selected is currently being played by another group in a previous round of play, the group may wait for that round of play to be completed. For example, if one group is playing a given machine as their first machine, a different group may choose to wait for it as their second machine.

When all three games have been completed by a group, each player will have a point total for that rounds in their division. Two players will advance from each group to the following round.

At the end of the four game set, the players’ win-loss records against one another are compared to determine which two players from each group advances to the following round.

Single Elimination: Players compete head-to-head in a standard bracket. The winner of each match, typically either a single game or best two out of three, advances in the bracket while the loser is eliminated from the tournament. For any tournaments that include a separate qualifying procedure, Directors are encouraged to make all single-elimination rounds best two games out of three at a minimum. For smaller tournaments where time is critical, or those consisting solely of a small, local group of players, a true single-elimination bracket is acceptable. (insert example bracket)

How Long Will It Take?

An important part to running a successful event is managing your time successfully. If your event only has a five hour window for finals, choose a finals format that fits your time slot. Here are some real-life examples of the finals formats used and the amount of time it took to crown a champion.